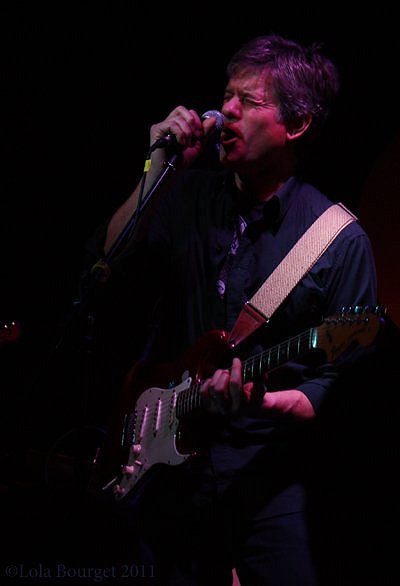 André began playing guitar in the late 60s, at a time when it was about The Beatles and The Rolling Stones.   Growing up in a home filled with music, André was  heavily influenced by the Beatles and the Stones, as well as Led Zep, Elton John, Cat Stevens, David Bowie and others.

After taking some formal guitar lessons, André continued on as a self taught player, and participating in many garage, and other bands since he  about 16 years

Stevie Ray was the first real blues guitar players André caught on to. After that he was influenced by many, such as Clapton, Buddy Guy, Albert Collins, B.B King and Rory Callagher, not to mention newer players like Robert Cray, Jonny Lang, John Mayer and Jazzy Robben Ford.
" The blues gives you the possiblity of doing your own thing (expressing yourself) in a structured arrangement."
Lately, André plays in several local bands, but Blues Chaser is a new band with great players, and André sees a lot of potential here. The band is just getting started.  A demo cd is in the works and more live gigs are coming up.   "I'm looking forward to seeing where Blues Chaser will take us!".

Born and raised in the Montreal area, Kim was musically inspired at a young age. He received his first guitar when he was ten.

As a young man in the 70's, Kim played in classic rock cover bands. Dedicated and focused, he began playing professionally at dances and coffee houses when he was just 14 years old.

In the late 1980's, Kim was playing with the St. Lawrence Blues Band, and by?, he was a founding member of The Moonlight Blues Band, playing popular venues in and around the Montreal area. Kim also works with Stormy Weather, another local blues band.

Although Kim is comfortable playing a variety of musical styles, he personally gravitates towards blues and blues oriented music.

For over 25 years Kim has been teaching guitar and has mentored many budding musicians of all ages.

Aside from playing with Blues Chaser, Kim continues to teach. His other projects include working on an instrumental CD, as well as recording and producing for others in his home studio.

At 23, Jesse is the youngest member of the band.  He started playing drums when he was 9 ½.

Along with his father Kim, Jesse played his first paying gig when he was just 12, performing dinner music at a Montreal café, as well as playing with his father's bands, Moonlight Blues in the late 90?s, and more recently, Stormy Weather.

Jesse has been involved in several studio projects and worked with some of his own bands.

Although Jesse is young,  he is a skilled performer. Musically, he is a very interesting drummer, with a style rooted in bebop jazz and afro-Cuban rythms.

Also, as a accomplished slide guitar player, Jesse is heavily influenced by bluegrass and delta blues genres. When he isn't working with Blues Chaser, he plays slide in an acoustic duo, Uncle Gary and the Lawnboys.

Jesse also bring his one man band act to Blues Chaser. A rootsy blues performance where Jesse plays slide, drums, and sings. It's a crowd favorite!

Unless otherwise stated, all original photography by Lola Bourget

Oops! This site has expired.

If you are the site owner, please renew your premium subscription or contact support.